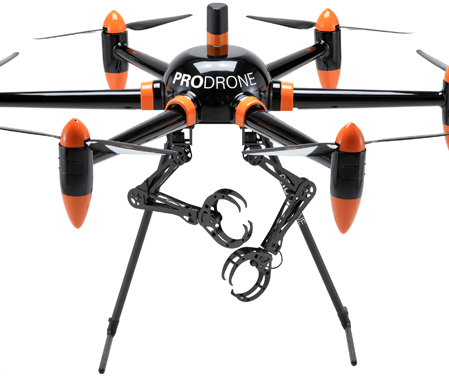 Commercial drones have taken off in popularity even before legal regulations were set by the Federal Aviation Administration (FAA). Now that there are laws governing the commercial use of drones, companies from many different sectors are scrambling to try to find how these amazing aerial vehicles can improve their business. At first, it may seem like they are just a novelty or only applicable for film and photography, but Unmanned Aerial Vehicles (UAVs) use is only limited to the imagination and creativity of the user. Mining operations are using them to survey land and monitor equipment; infrastructure developers are utilizing UAVs for inspections, and manufacturers are even looking at these pieces of innovative technology to help with inventory management. However, drones could have just gotten a big upgrade that may lead to a revolution in the manufacturing sector.

This drone, named PD6B-AW-ARM and manufactured by PRODRONE has two 5-axis robotic arms attached with a max payload of 44 pounds. Engineers were able to repurpose the company’s existing airframe and innovate the design by adding these impressive robotic arms. Each arm has a max payload of 22 pounds and advanced algorithms help stabilize the drone when using its arms. For example, if the drone needed to lift an object with one of its arms while moving an object out of the way with the other, its center of gravity will shift making it unstable. This new algorithm makes the necessary corrections for a controlled flight no matter what the task is at hand. In the world of drones, 44 pounds of total payload capacity is considered heavy-duty. Offering the flexibility of having two robotic arms can open up new doors beyond just package delivery. These robotic arms can offer manufacturers and other industrial sectors even more freedom to experiment with this emerging technology throughout their own business.

As of now, flight time is limited to 30 minutes. This is considered high when taking into account the size and its capabilities, however as battery technology continues to advance we can expect to see drones like the PD6B-AW-ARM push the boundaries of flight duration in the near future.

What makes this drone so profoundly innovative is that the engineers at PRODRONE expanded on the standard design that nearly everyone associates with drones. Adding robotic arms offers these UAVs the ability to perform tasks that were not possible with other commercial or industrial drones. In the past, drones were mainly used for aerial surveying, photography and inspection because they were essentially just eyes in the sky. Now operators have the option to manipulate objects from the ground as their drone will do the ‘heavy’ lifting. One application manufacturers are excited about is the ability to scan warehouse inventory at an impressive rate. Now, the PD6B-AW-ARM could take this application to the next level and even retrieve inventory from the warehouse. Imagine for a second having the ability to pull up a package on the computer that a manufacturer needs to ship out, then being able to click a button and an autonomous drone with arms can fetch that exact piece of inventory and fly it right over to the loading dock. The applications are boundless.

It is important to remember that this is the first line of drones with robotic arms attached. The technology is still in its infancy, just like drone technology in general. As the technology advances and continues to mature, it won’t be surprising to see drones that can stay in the air longer, lift heavier objects and implement increasingly dexterous robotic arms.

Take a look at the video below to see the PD6B-AW-ARM in action: