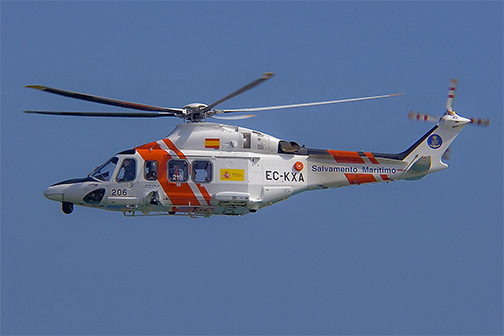 Washington – The Export-Import Bank of the United States (Ex-Im Bank) has approved a $22.4 million loan guarantee to finance the export of U.S.-made AgustaWestland AW139 helicopters to North Pole Investments in Panama for leasing and use in Colombia’s offshore oil and gas industry. The lender is Apple Bank for Savings of New York, N.Y.

According to Ex-Im Bank estimates derived from Departments of Commerce and Labor data and methodology, the Bank’s financing will support an estimated 200 jobs at AgustaWestland’s manufacturing and operations facility in Philadelphia, Pennsylvania., and in the company’s U.S. supply chain.

Ex-Im Bank Chairman and President Fred P. Hochberg made the announcement while participating as a member of the U.S. government delegation to the Summit of the Americas conference being held in Panama City.

“We are pleased to finance the exports of these quality, American-made helicopters because of the jobs in Philadelphia that will be sustained as a result,” said Hochberg. “This transaction will empower AgustaWestland to continue to grow in Latin America while maintaining good-paying aerospace jobs here at home.”

Ex-Im Bank plans to co-finance this asset-backed transaction with Italy’s export-credit agency, Servizi Assicurativi del Commercio Estero, S.p.A. (SACE), which is anticipated to provide a guarantee for a portion of the financing covering foreign content. The majority of the export is the U.S. content, which consists of manufacturing activities, assembly, customization, avionics and instrumentation.

North Pole Investments is an aviation lessor headquartered in Panama City. The company leases aircraft mainly to Helistar S.A.S., a civil charter services operator based in Colombia. The AW139 helicopters being financed will be leased to Helistar and will be deployed for offshore oil and gas crew transport in the Colombian Caribbean continental shelf.

AgustaWestland’s manufacturing and operations facility in Philadelphia employs nearly 600 U.S. aerospace and administrative support workers. In February 2008, the company opened a second AW139 assembly line in Philadelphia to meet the growing demand for its helicopters, particularly in expanding markets in the Western Hemisphere.

The transaction is Ex-Im Bank’s fourth financing of exports of U.S.-made AgustaWestland helicopters to Latin America. In August 2009, the Bank assisted in financing the export of AW139 helicopters to the government of Trinidad and Tobago for use in search and rescue operations. In December 2012 and in July 2013, the Bank approved loan guarantees financing AW139 helicopters for export to Omni Taxi Aéreo to meet its transportation contracts with the oil and gas industry in Brazil.

Ex-Im Bank is an independent federal agency that supports and maintains U.S. jobs by filling gaps in private export financing at no cost to American taxpayers. The Bank provides a variety of financing mechanisms, including working capital guarantees, direct loans and export-credit insurance, to promote the sale of U.S. goods and services abroad. Ninety percent of its transactions directly serve American small businesses.

In fiscal year 2014, Ex-Im Bank approved $20.5 billion in total authorizations. These authorizations supported an estimated$27.5 billion in U.S. export sales, as well as approximately 164,000 American jobs in communities across the country.

Small-business exporters can learn about how Ex-Im Bank products can empower them to increase foreign sales by visiting the website.

Flying Cars Expected Within the Next Few Years

SpaceX will try to launch, land another Falcon 9 LIVE