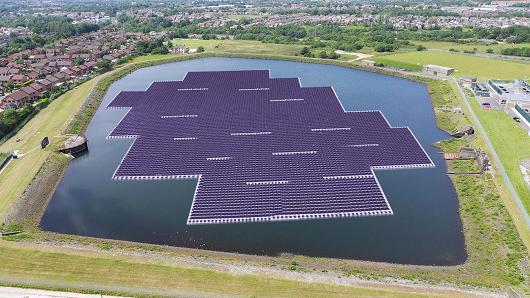 We spoke recently about the new concept of floating wind farms far off the coast (https://mfgtalkradio.com/the-semi-submersible-wind-farm/) so we thought it was only right to investigate a new system that will allow for building large solar installations off shore. Engineers at the Vienna University of Technology are developing the Heliofloat, a new flotation system that would make it possible to build 100 m long platforms covered in solar panels and able float on the surface of the ocean without waves causing damage to these delicate systems. Working through a spin-off company, TU Wien, the team of researchers’ is still looking for new investors to get their platform to market.

It is still under development but the concept works by utilizing large flexible, open-bottom floats to mitigate the movement caused by waves. “The key to this, is that Heliofloat is supported by open flotation devices, – Were a platform to be simply mounted onto air-filled, closed containers, the design of the construction would have to be inefficiently heavy and robust in order to be able to withstand heavy waves.” explains Prof. Markus Haider, from the Institute for Energy Systems and Thermodynamics. bit.ly/1Uc9TYI

The flotation devices aren’t like anything you would find on a raft, instead they are similar to downward-facing barrels made from a soft, flexible material that is naturally buoyant on water. The upper section of the barrel-like-float is closed off so air can’t escape but the air will have contact with the water below. The air column works as a shock absorber and the flexible side walls only absorb small, horizontal forces. This innovative support structure is the key to eliminating the up-down motion of the waves so these platforms can withstand even the most treacherous of seas.

Heliofloat will use several of these open air flotation devises which are positioned below the large, even floor space where solar panels can be installed. If ridged air cushions were used, like those on a raft, too much of the wave energy would be absorbed causing the platform to jump up and down and side to side widely, eventually leading to the platform capsizing or breaking apart.

TU Wiens research team continues to explore other possible applications for the Heliofloat technology. Some exciting applications include but are not limited to desalination plants, biomass extraction, protection of lakes from evaporation, and possibly even residential housing.

For now, the platforms are focused on supporting photovoltaics and parabolically shaped mirrored troughs which are the two most common forms of solar installations. A 1 meter by 1 meter prototype will be unveiled at the Hannover Messe trade fair this year.

The technology could have a profound impact on the way renewable energy is generated around the world. Solar installations demand a lot of space, and in some areas there’s not much land or roof top space to go around. Having the ability to utilize the vast expanse of our oceans for more than one renewable energy source could further support a growing solar industry. It would even open up new markets in countries that are not ideal for conventional solar installations. The Heliofloat is truly an incredible piece of engineering and design and a bright future is expected as the team continues to bring this technology to market.