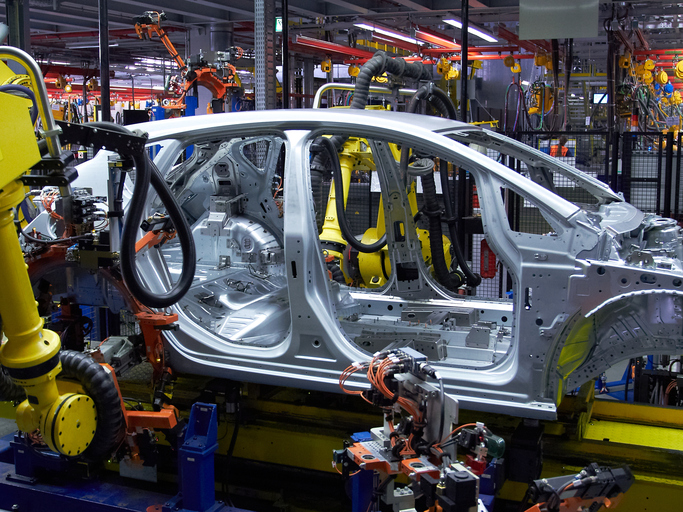 General Motors Takes On The IIoT

General Motors’ has been using robots throughout their manufacturing production lines for years now. The idea of automation to increase production and assist employees is not a new concept to the behemoth manufacturer. However, there is a relatively new concept that made its way to the manufacturing industry and that is the connected shop floor. GM just recently connected about a quarter of their 30,000 factory robots to the internet. They’re already starting to see it pay off in a big way.

Mark Franks, director of global automation is excited about what connecting industrial robots to the internet can do for their business. In the last two years alone, GM avoided 100 potential failures of vehicle assembly robots just by analyzing data that was sent from the robots to the cloud. It’s helping to avoid interruptions on the assembly line and this is just the start.

“If we can avoid a disruption in our manufacturing, we can save ourselves a significant amount of money,” Franks explained. The ROI is there and these robotic systems are becoming affordable enough where medium and even some small manufacturers can begin to take advantage of what robots have to offer. Now that larger companies like GM hammered out a lot of the issues associated with a new technology, smaller manufacturers have an example to follow. This could help those manufacturers generate a return much more quickly.

Some of the other benefits of internet monitoring include the ability to order parts when the system thinks a component is wearing out. This cuts down on inventory as a manufacturer won’t have to carry excess parts around, instead the connected robot will order them as needed.

GM expects even more applications and possibilities to present themselves in the future in regard to internet connected robots. Common with any emerging technology, the more popular they become, innovators will begin to find new ways to utilize the technology to benefit their business.

Manufacturers have a unique opportunity to greatly improve their operations. The simple bonus of not having to over order parts for industrial robots can have a dramatic impact on a smaller manufacturers bottom line. It could even help them pass those savings onto their customers as well. Manufacturers, especially those in the United States are searching for ways to increase their global competitiveness. Having the chance to shave pennies off wherever they can could mean the difference between thriving and just surviving.

The Industrial internet of Things has had manufacturers excited for quite some time now. However, with no clear roadmap on how to implement the technology or even not knowing if it will pay off made many businesses hesitant to experiment.  Now that larger corporations took on the initial challenge of creating a way to maintain and incorporate these connected systems into their manufacturing operations, SME’s can begin to follow their example.

With new technology like connected robots and the IIoT becoming more common, more manufacturers stand to reap the rewards. This could have a dramatic impact on the modern manufacturing industry and take the idea from concept to reality. It’ll be important to keep a close eye on these developments. Be sure to check back on Manufacturing Talk Radio soon to keep tabs on the latest industry news and trends shaping the future of the manufacturing industry.