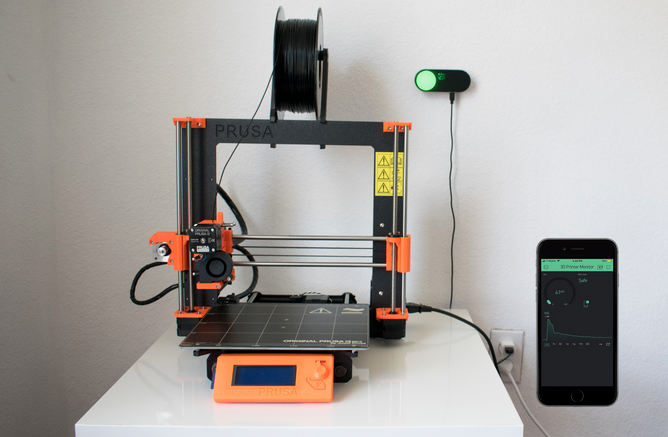 Makers around the world that utilize 3D printers for their creations often times do not worry, or are unaware of the harmful fumes created by their device. To tackle this issue a high school student from San Diego, Gary Peng, has created a project that will help alleviate this stress from the additive manufacturing community.

As Peng explained on Hackaday.IO, “3D printing is a relatively new technology, and its danger is often overlooked. The research on the toxicity of 3D printing is few and far between, but one thing is certain: harmful volatile organic compounds (VOCs) are emitted during 3D printing.”

The Smart 3D Printer Emission Monitor created by Peng works by checking the air quality while the 3D printer is in use. The device collects data on the volatile organic compound (VOC) emissions, and the information is then transmitted via Wi-Fi to a smartphone app to notify the user if the workspace their using has become dangerous.

All of Peng’s products are 3D printed and have been released as DIY kits, which need to be assembled. This means that users can customize, upgrade, and repair them on their own. The Smart 3D Printer Emission Monitor follows the same pattern and can be seen in the video below.

Peng has built a Blynx user interface and made sure that the warning signs were simple and easy to understand. Green means everything is all clear, while yellow means that proper ventilation is needed, and finally red means that immediate action is necessary. On top of having real time alerts, the device allows users to view a full history of their VOC readings.

In order to collect the VOC data, the device utilizes a CCS811 gas sensor that is capable of detecting a wide range of hazardous emissions, including the carcinogenic formaldehyde, and transmits that information to a particle photon. The IoT device then feeds the information to the Blynx interface.

Those interested in building this device themselves can find the STL files over on Github. While the instructions and additional parts needed can be found over on Hackaday.

Episode 366: The Global Show with Norbert Ore for September 2019