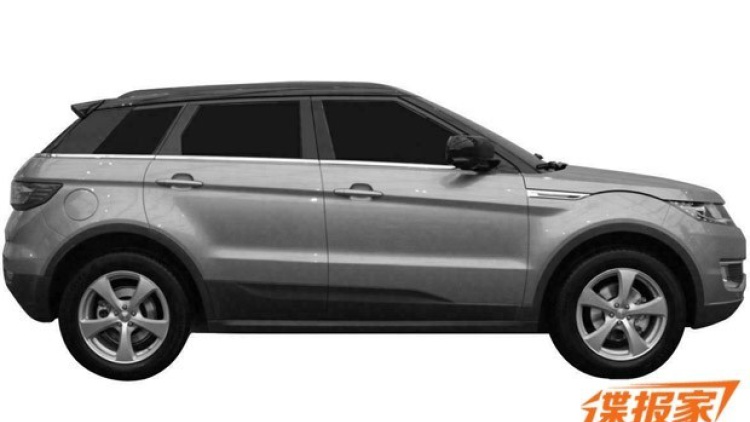 Chinese car company unveiled an Evoque facsimile, called the “Landwind X7,” last year at the Guangzhou Auto Show. Jaguar Land Rover were not happy because it looks exactly like the Range Rover.

Jaguar Land Rover is in the midst of a major sales push in China. In order to have enough cars to sell, the company is planning to construct a $US1.8-billion factory to build the Range Rover Evoque crossover.

Given that kind of commitment, the people at really upset that they are producing a copy of the car, and for a much lower price.

Now the Landwind X7 is on display, this time at the 2015 Shanghai Auto show. Not surprisingly, the controversial crossover has drawn the ire of Jaguar Land Rover.

“I really regret that all of a sudden copy-paste is coming up again,” Jaguar Land Rover CEO Ralph Speth said at a press conference. “That will not help the reputation of China, of Chinese industry at all.”

When the X7 debuted last November, Jaguar chief designer Ian Callum tweeted out photos of the Landwind. The bemused design legend wryly pointed out the aesthetic similarities between the Chinese car and the Evoque.

News of the knockoff Evoque first leaked last April, when Landwind reportedly patented a vehicle called the “E32″ that looks to be the predecessor to the production X7

In a statement to the Wall Street Journal last November, Jaguar Land Rover made it clear that once an investigation is complete, the company will “take whatever steps are appropriate to protect its intellectual property.”

“There are no laws  to protect us, so we have to take it as it is,” Speth told reporters. “In Europe, we can be protected against this kind of copy-paste in the design language, in the features but also the technology.”

“You can’t be protected in China,” Speth added.

According to FT’s Tom Mitchell, a representative from Landwind dismissed JLR’s accusations as “irresponsible.”

Landwind, a joint venture between China’s Changan Auto and Jiangling Motors, produces a series of SUVs sold predominantly for the Chinese domestic market. However, Landwind did make history in 2005 when it became the first Chinese automaker to export its vehicles to Europe.

The 1989-’98 Isuzu Rodeo-based X6 was imported to the Netherlands for a short time, but didn’t sell well, after news surfaced of the car’s spectacularly poor showing at Germany’s ADAC crash tests, scoring a 0 out of 5.

According to Bloomberg, The Landwind X7 is expected hit showrooms this summer with a price tag of around $US24,000, while the Chinese market Evoque starts at around $US72,000.

Automakers rev up innovation in the Bay Area