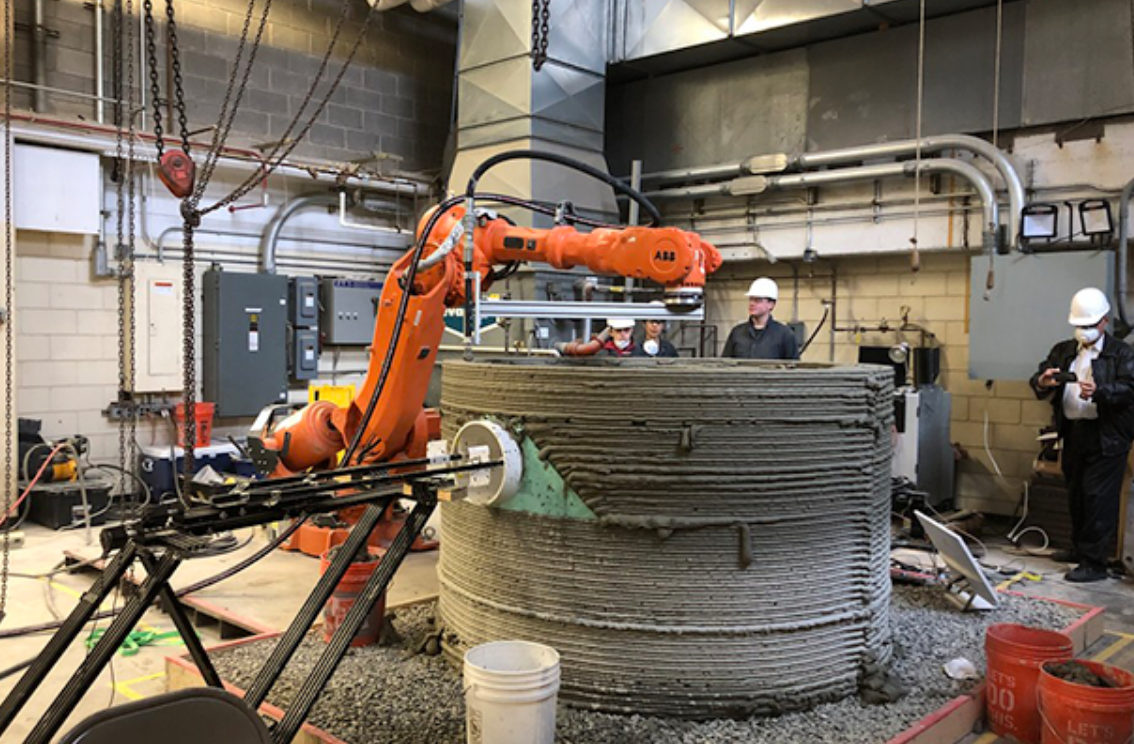 A team from Pennsylvania State University has been awarded $75,000 dollars to develop a 3D printing system for concrete.

$50,000 of this sum has been provided by the College of Engineering’s Engineering for Innovation & Entrepreneurship (ENGINE) grant program, with the other $25,000 coming from the College of Arts and Architecture.

This announcement follows the team’s participation in NASA’s Printed Mars Habitat Challenge, the researchers are developing high-performance, sustainable concrete with a new cement-based mixture to be used with their six-axis robotic additive manufacturing machine. According to PSU, this will allow for the construction of complex structures that are also waste efficient.

“The technology for 3D printing of concrete is not being developed to replace conventional construction that can be carried out economically with existing methods,” said Ali Memari, principal investigator of PSU’s MarsCrete project and Professor. He continued by saying “rather, this technology will be more useful for complex designs, where conventional methods of using formwork will be much more expensive or prohibitive.”

The multidisciplinary PSU team is made up of faculty members from multiple schools including: School of Engineering Design, Technology, and Professional Programs (SEDTAPP), College of Arts and Architecture, and the Stuckeman Center for Design Computing (SCDC). José Pinto Duarté, Professor at SCDC, said that this collaboration was created so that the researchers could conquer the complexities of 3D printing concrete.

“Given the breadth and depth of the knowledge required, it would be rather difficult for a single investigator to perform meaningful research at a reasonable pace in this area. Multidisciplinary collaboration among researchers with different, complementary expertise is, therefore, essential.”

Thanks to the challenge NASA held back in 2017, a concrete 3D printer system with a dual mixer and pump feeding a nozzle manipulated by an industrial six-axis robotic arm was developed. The grant has allowed the team to accelerate their development of new concrete mixtures that can be used inside of this machine.

According to the team at Pennsylvania State University, traditional concrete is made up of ordinary Portland cement (OPC), water, sand and aggregates. The production of a ton of OPC, requires between 1,700 and 1,800 megajoules of energy. This process also emits approximately one ton of carbon dioxide into the Earth’s atmosphere.

The team is testing and improving every aspect of the system including material mixture, characterization and design, as well as the additive manufacturing process so that they can properly eliminate or reduce the negative effects of each variable. Ultimately, the researchers believe this will eventually lead to more control over the 3D printing system, allowing them to create complex structures.