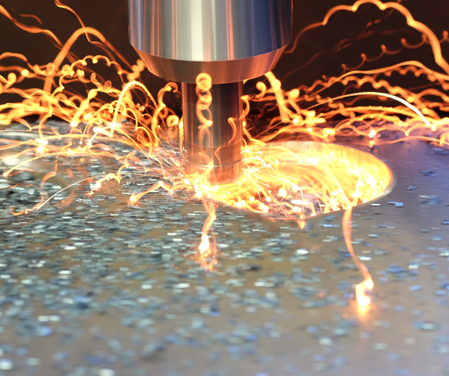 An international team of researchers from across the globe have been hard at work to figure out how to control the “shear band” defect that occurs in metals during the manufacturing process. Their hard work has led to the discovery of how exactly to control this problem that is faced by many manufacturers today.

Many manufacturers have experienced the inconvenience of shear banding, an issue that typically arises during the high speed machining of metals commonly used throughout the industry. The “shear band” or more generally known as strain localization is an abnormality that arises when a ductile material is deformed. This phenomena cannot occur in brittle materials and occurs in nearly every type of ductile material such as metals, alloys, granular materials, plastics, polymers, and soils.

What makes shear bands particularly troubling is that the problem occurs before failure of the deformation, this means that any deformation happening within a shear band can lead to intense damage and fracture. This is what made the research so important, if it was possible to control shear bands then the answer to the failure of ductile materials would be understood.

The researchers found that shear banding occurs in two separate phases. The first phase is when the metal is initially being cut which causes a “weak interface” to form. Then as the metal is being deformed it shears on this interface that was created and causes the abnormality. The team discovered that the way to fix this problem is by using what is called the “suppression method.”

The suppression method works by adding a wedge-shaped die across from the cutting tool. This extra part makes it so that the sliding phase is no longer necessary and instead the chip from the metal is channeled between the two parts. “You can think of it as the tool consisting of two parts, one doing the cutting and other doing the constraining.” said Chandrasekar, a professor of material engineering (bit.ly/2cRYtJ1).

All of the researchers findings were published online in August in a paper titled Proceedings Of The Royal Society A. (bit.ly/2dk1nZH) The implications of this research are incredibly important to the manufacturing industry and it is going to be very exciting to see what manufacturers do with this revolutionary discovery.

Hydrokinetic Power Making Waves Off The Coast Of Hawaii