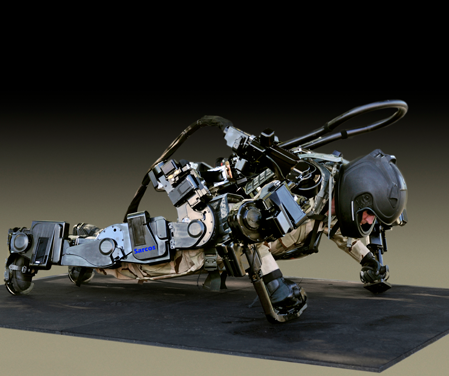 Imagine a future where individuals can utilize exo-suits to handle all the heavy lifting in manufacturing warehouses and factory floors. Productivity, efficiency and workplace safety could skyrocket.  Sarcos Robotics is about to make that dream a reality in the near future with the help of a $10.5 million grant they received from big name investors which includes Microsoft, Caterpillar Ventures, and GE ventures. This was announced on September 12th and Sarcos Robotics Co-Founder, Chairman, and CEO Ben Wolff states stated: “we are thrilled to collaborate with Caterpillar, GE, Microsoft, and our other new investors to enhance the capabilities and relevance of our robots and to accelerate delivery of our robots to key industrial sectors.” prn.to/2ddPNjY

Sarcos plans to speed up production with help from the grant, these robotic systems are known as the Guardian series. This series of human operated robots is centered around the idea of doing jobs that would normally be considered too difficult or dangerous for a person to do on their own. This includes tasks ranging from military applications to civilian use and each of these robots is incredibly unique.

The three robots in the guardian line are the Guardian S (Snake Robot), Guardian GT (Big Arm), and Guardian XO (Exoskeleton). The smallest of these robots is the Guardian S whose design was centered around maneuverability. The robot is not only able to move through right spaces but it can also fit itself around pipes and traverse vertically up them. With the robots snake like design and lightweight build it can easily find damaged components and chemical spills in environments that would be unfit for a human to enter.

Sarco’s next robot is the Guardian GT, it resembles two arms mounted on a tracked vehicle base. Each arm is seven feet in length and can reach up to four feet in front of the base it is mounted on. Guardian GT can also lift payloads up to 400 lbs and is controlled either remotely or with a fiber optic control system that can be manually operated. The control system is set up so the robot arms move in synch with the way the operator controlling the machine maneuvers their own arms. This system allows for quick and precise industrial lifting that otherwise would have been impossible with other industrial equipment on the market today. This robot has applications that reach nearly every manufacturing sector such as welding, grinding, application of coatings, and material handling.

The last robot in the Guardian series is the exoskeleton Guardian XO. This suit fits around a person and enables them to lift much more than they would normally be able to and with minimal effort. These suits have huge potential for manufacturing, enabling warehouse employees to move heavy boxes with ease and keep them safe from sustaining injuries. Right now the exoskeleton comes in two forms which are the tethered and untethered version. The tethered version is hooked up to an external power supply which enables it to be used longer but as of now Sarcos is working on ways to lower power consumption so that the untethered version can be used for a more substantial amount of time.

Sarcos is very close to making what seemed like a distant future a reality. Their technology has a huge amount of potential for the manufacturing industry and it is going to be especially exciting to see how businesses implement these robots in their day to day operations.

Hanjin Shipping Co.: What Does The Future Hold?