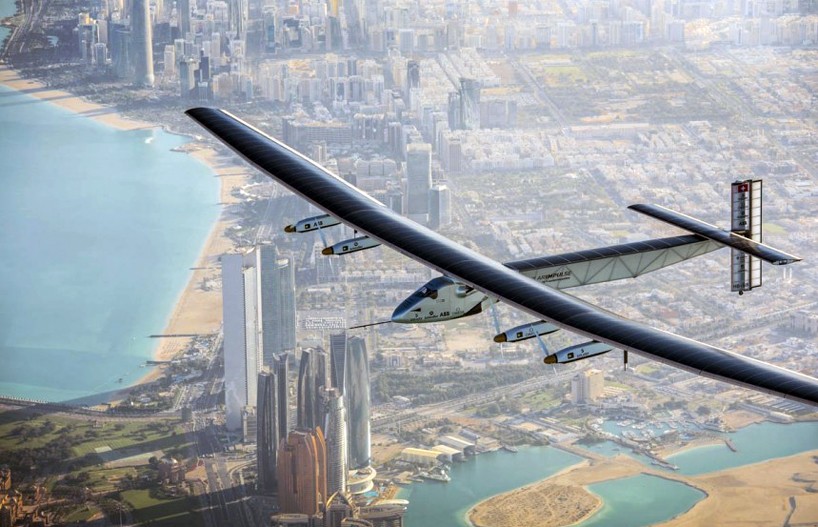 The Solar Impulse 2 is the second generation of a revolutionary experimental aircraft that can fly without a drop of fossil fuel. Using 17,000 solar cells located on the wings which span wider than a Boeing 747, it is able to maintain speeds of about 60 mph during the day and reserve enough energy to sustain flight at night. This leg of its round-the-world journey took 62 hours in the air, crossing the Pacific and landing in California at 3am 4/24/2016.

This is an amazing feat for modern technology as this plane runs on 100% clean energy. Airbus and other major aerospace manufacturers are working on hybrid-electric engines for commercial aircraft, but the Solar Impulse removes all need for fossil fuels rather than minimizing its use.

It is piloted by Swiss explorer and psychiatrist, Bertrand Piccard and he is extremely pleased about the results of the terrific expedition across the Pacific. “”It’s a new era. It’s not science fiction. It’s today, – It exists and clean technologies can do the impossible.” A statement made by Piccard to CNN after he landed in California’s Mountain View airport.  cnn.it/1T6vLzH

Even with its impressive wingspan, the aircraft only weighs about as much as an SUV. This helps it stay in the air while using as little energy as possible. When it comes to aircraft, the lighter the better and when the only source of energy is solar power this even more important.

“I’m very happy that everything works extremely well and the airplane is functioning as it should, – It’s a demonstration that the tech is reliable.” Swiss engineer Andre Borschberg and Piccard’s business partner, told CNN by phone. cnn.it/1T6vLzH

This is the ninth leg of the round-the-world trip and has made it so far from its original take off location in Abu Dhabi. The Solar Impulse was originally scheduled to land back in Abu Dhabi in march of 2015 but was sidelined for nine months after the batteries were severely damaged by overheating. Piccard noted that this was a human error, they made the mistake when it came to the cooling system and battery maintenance. They fixed this issue by upgrading the Solar Impulse with new batteries and a new cooling system. The new cooling system can be manually operated by the pilot so as to avoid any damage to the batteries in the future. It can be seen with the latest leg of the journey that the cooling system performed flawlessly.

The Solar Impulse 2 is just a functional concept as of now, designed to show the world that energy alternatives are out there and to discover its limitations. These flights around the world being made by Solar Impulse have already shined a light on how much solar technology can accomplish while discovering where issues arise. Testing like this is extremely rigorous and very risky for the pilots involved but each hour in the air is another huge leap forward toward a cleaner future.

As the Solar Impulse 2 continues its trek around the world the discoveries being made will help provide the groundwork for commercial aerospace manufacturers to begin investigating 100% emission free flight. The aerospace industry is booming and more plans are in the air than ever before in history. This means it’s more important than ever to investigate ways to cut back on the burning of fossil fuels. The Solar Impulse 2 is laying the foundation today for a cleaner aerospace industry tomorrow.