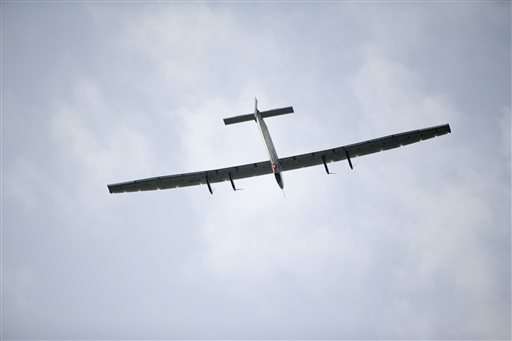 The Solar Impulse 2 is a completely solar powered plane and has just broke the world record for longest continuous flight. The record breaking flight faced difficulties right from the beginning as its original take off plan was disrupted due to harsh weather. After the initial hurtle and a change in take off location the Solar Impulse 2 successfully took to the air from the Japanese city of Nagoya on June 29th. Landing on July 3rd the Solar Impulse 2 landed safely at Hawaii’s Kalaela Airport.
This was the eighth of the 13 expected legs of the trip and is considered the most dangerous 4,000 miles of the round the world journey because the pacific offers no place for an emergency landing. It is amazing to see how far this project has come since it began in 2002.

The Solar Impulse 2 has 17,000 solar cells across its wings which charge lithium batteries that give the plane the ability to run the solar powered engines at night. This amazing piece of technology has a wingspan of 72 meters(larger than a Boeing 747-8I) with a weight of just over 5,000 lbs. This flight took nearly 118 hours from Nagoya to Hawaii. The voyage was recorded by Pilot Andre Borschberg through his twitter account @andreborschberg and was also streamed live on Solar Impulses website Solarimpulse.com. This is an amazing accomplishment, not only for the company and pilot but for the entire solar energy industry.

This landing furthers Solar Impulses larger mission which is to legitimize the possibility of renewable energy passenger airplanes in the future. Solar power is not yet feasible for commercial travel. The ideal flight speed is about 28 mph but will double during the day when the sunlight is the strongest. With advances in solar technology and electric power storage, this speed is expected to improve. There are no solar-powered airplanes coming to the passenger industry anytime soon but with this record breaking flight the concept of solar-powered passenger planes have taken a great leap forward.
http://phys.org/news/2015-07-solar-powered-plane-due-hawaii-five-day.html
http://info.solarimpulse.com/en/our-adventure/solar-impulse-2/#.VZrj6fm6e1u
http://www.cnet.com/news/solar-impulse-breaks-record-for-longest-sun-powered-flight/