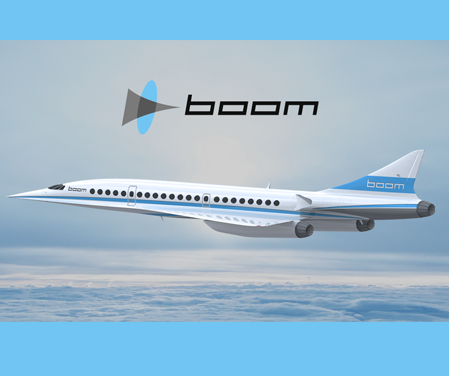 Supersonic Technology: Reclaiming Its Spot In The World Of Aviation

Being stuck in the economy section of a plane moving at a slow and steady pace toward your destination is a situation that’s infamous amongst frequent and not too frequent flyers. Many alleviate this pain by purchasing a more expensive ticket that may offer some more leg room and nicer food, but ultimately spending the extra cash does not make the trip go any faster. Fortunately one aerospace company seeks to rectify this speed issue and bring supersonic passenger travel back to the common consumer.

The Denver startup Boom Technology showed their initial design for a supersonic passenger jet back in March. While this plane, which they are calling XB-1, is still years away, it plans to make travelling the most efficient it has ever been. Boom boasts on their website that their innovations are able to cut the 7 hour flight from the U.S. to London down to 3 hours and 15 minutes. The flight is a bit more costly than a typical flight running customers around $2500 each way. Founder of the company Blake Scholl, stated “The idea is for a plane that goes faster than any other passenger plane built before, but for the same price as business class.” (bloom.bg/1pYoTO3)

Blake Scholl is someone most would not expect to be behind creating a successful aerospace company. Scholl is relatively new to coding, an amateur pilot, and before starting a successful mobile shopping app, which Groupon bought out, he worked at Amazon for five years. After the buyout of his app he began brainstorming ways to make air travel easier for everyone. He set out on his mission by purchasing tons of aerospace textbooks and meeting with various experts whom eventually concluded that his idea was more than just science fiction. The next step of his grandiose plan was to get people to join his cause that had insight into the aerospace manufacturing industry. In January, Boom moved out of its headquarters in Scholl’s basement and into a hangar at Centennial Airport in Denver alongside many other Aerospace startups.

Boom currently has 11 people working on the XB-1.  These experts range from pilots to engineers that have plenty of experience designing jets. These professionals say that the design has only become possible recently due to new software and materials that have been released in the past couple of years. For example, their plane is built with carbon fiber composites instead of the more commonly used aluminium which becomes unstable at speeds faster than Mach 2. Another great example of new technology making this possible is that computer software is constantly improving and they are able to run millions of simulations on designs everyday so they do not need to waste their time making tweaks in wind tunnels.

Thanks to these simulations the company has proven that their design is quieter and 30 percent more efficient than the Concorde, which was the last supersonic jet made for passenger travel. One of the most fascinating aspects of this plane is that it will travel at a height of 60,000 feet.  At this height, passengers will be able to see the curvature of the Earth while also traveling over 2 times faster than they would on other passenger planes. As of now their website says that engineering development is moving rapidly and that with the main aspects of the plane completed, vehicle assembly will start soon.

The X-B1’s first flight is planned for early 2017 and it is going to be fascinating to see the potential of this plane as it is put to the test. Manufacturers should also be very excited to see this plane is success because if all goes well, they are going to need plenty of people ready to produce the various components of this amazing machine. XB-1 is one of many new planes coming in the near future so make sure to check out our write up on Aurora Flight Sciences D8, too. (bit.ly/2fjTpRj)

Autonomous Truck Makes It's First Delivery: What It Means For Manufacturers