Tesla Announces Plan To Build a New Factory In China

Just one day after announcing price increases on both the Model S and Model X in China, electric vehicle manufacturer Tesla announced they are moving forward with a plan to build a factory in China with an annual output of 500,000 vehicles.

While Tesla’s intention to build cars in China is not new news, it’s hard not to see the connection between the price increases, the accelerated push to build in China and the looming trade war between the US and China. Tesla CEO Elon Musk has been openly working on a deal to produce his cars in China as part of his stated goal of rapid growth, saying as recently as November that a plant in Asia was “about 3 years away” but this latest development clearly shows an increased urgency. Musk also indicated production numbers would be in the neighborhood of 200,000 vehicles annually.

The South China Morning Post reported that Musk was in China Tuesday to sign a crucial agreement to begin construction immediately. The new factory will be be built in Lingang New City with the first vehicles rolling off the assembly line in the next 24 months. Tesla will likely produce their entry-level Model 3 and upcoming Model Y at the new facility.

With prices for the entry-level Model 3 and Model X SUV soaring by as much as $30,000 as the result of U.S.-imposed tariffs on vehicles exported to China, Tesla seemingly had no choice but to aggressively move forward with their China facility. 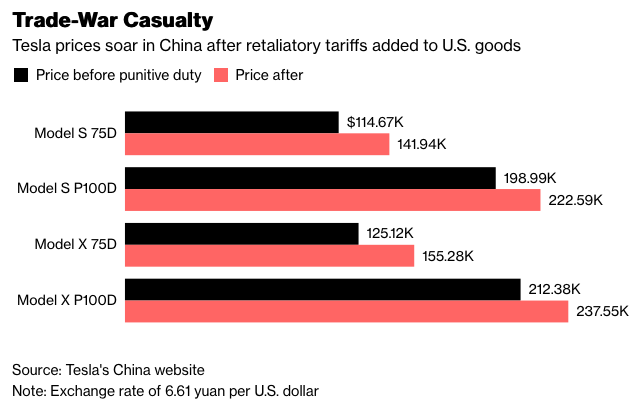 China represents a tremendous growth opportunity for Tesla with over 770,000 “new-energy” (battery-powered, plug-in hybrid and fuel-cell) vehicles sold last year. 14,779 of those were made by Tesla which makes them the #10 brand in segment. China represented 17 percent of Tesla’s revenue in 2017 and with the Chinese government’s target of 7 million new energy vehicles by 2025 it’s not hard to see the logic in Musk’s plan. Tesla said in a press release: “Tesla is deeply committed to the Chinese market, and we look forward to building even more cars for our customers here.”