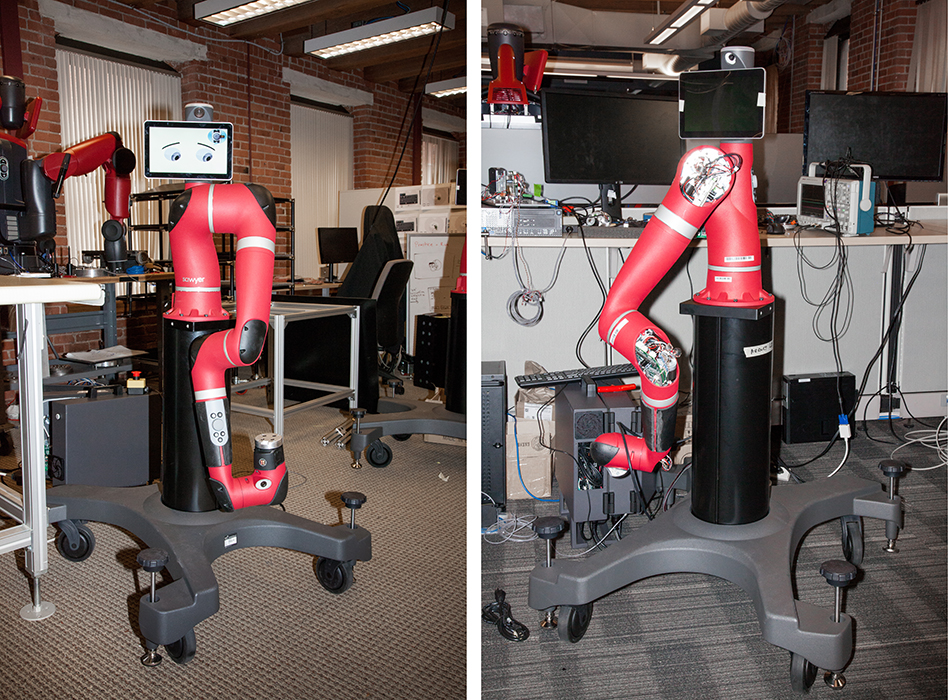 Artificial Intelligence isn’t fully here just yet but programmers, engineers and intellects are on their way to making new robots that can work alongside humans.

“…just in the past few years, digital technologies and all their manifestations, including robots, have been breaking out of the little box where they’d been operating and starting to demonstrate capabilities that they never, ever had before that are really impressive when you look at it. This was pretty unprecedented and unexpected and I think it’s going to — it’s already having pretty serious economic consequences.” -Andrew McAfee, principal research scientist and co-founder, Initiative on the Digital Economy, Sloan School of Management, Massachusetts Institute of Technology

A company that makes robots designed to work closely with humans has a new version that addresses the limitations of its first effort. 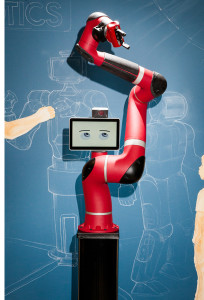 In a workshop at the Boston headquarters of Rethink Robotics, engineers are tending to a troop of eight bright red robots called Baxter. Each robot has a humanoid upper torso and a pair of friendly blue eyes on a small screen that track the robots’ two arms as the engineers move them.

Off to the side of the room, senior product manager Brian Benoit is assembling a new robot called Sawyer—Baxter’s little brother. It has just one arm and is also smaller, faster, and more precise than Baxter. If things go as the company hopes, this new robot will find work alongside humans on many manufacturing production lines.

Baxter, introduced two years ago, was designed to be far simpler, safer, and more intuitive to operate than a conventional industrial robot (see “This Robot Could Transform Manufacturing”). Traditional industrial robots are expensive to install and use, and must be separated from human workers for safety. To function properly they typically require that their environments be highly structured and unchanging.

Rethink says sales of Baxter, which costs $25,000, and is only available to manufacturers in the U.S., have only reached “several hundred.” This limited success, and the effort to develop Sawyer, suggest that Rethink may have misjudged the opportunity that comes with balancing simplicity and safety with accuracy and speed (see “Small Factories Give Baxter the Robot a Cautious Once-Over”).

The family resemblance between Baxter and Sawyer is strong. Sawyer is also red, and has Baxter’s eyes. It runs the same software. But improvements to the actuators that run its joints make Sawyer’s arm stiffer, and thus more precise. Sawyer can also lift more weight than its big brother. And a new camera is better at differentiating between parts and can read barcodes, addressing another limitation of Baxter for many manufacturing tasks. Sawyer will be available later this year for $29,000, and will be able to perform “a much bigger set of tasks than Baxter was able to,” says Rethink’s chief marketing officer, Jim Lawton.

Baxter is good at grabbing objects from a conveyor belt, but can’t perform many of the tasks that manufacturers are eager to automate. Sawyer is designed to perform so-called “machine tending” tasks, which generally require a human to stand next to a piece of machinery inserting and removing parts. One prominent example, from the electronics manufacturing industry, is called an in-circuit test: a worker inserts a newly produced circuit board into a machine, waits for the machine to run a brief test of the part’s quality, and then takes the part out and moves it down the line.

In-circuit testing can be almost like placing a puzzle piece, and if the positioning of a circuit is just slightly off, the test won’t work. Sawyer relies on an advanced force-sensing system to “feel his way” into the testing machine without damaging it or the part, and place it in the desired position, says Benoit.

Many manufacturers are eager to explore new manufacturing approaches because the cost of labor is climbing quickly, especially in China. The era in which manufacturers save money by setting up operations in areas of the world where workers are cheap is coming to an end, says Justin Rose, a partner at the Boston Consulting Group and coauthor of a recent report on the potential impact of collaborative robotics. The report found that 60 percent of all direct manufacturing tasks could be plausibly automated or augmented by robotics. The government of Guangdong province in China, where much of the country’s manufacturing takes place, announced last month that it would spend $152 billion to replace human workers with robots. 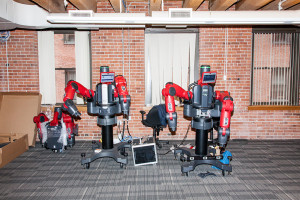 Rethink is not the only company hoping to capitalize on this. In the past two years, several companies, including established players like KUKA and ABB, and the smaller Universal Robotics, have introduced “collaborative” products, some of which look similar to Sawyer (see “Increasingly, Robots of All Sizes Are Human Workmates”).

Benoit says Rethink’s robots are distinguished by a unique characteristic known as “mechanical compliance,” which refers to an elasticity in the joints that makes them more inherently safe around humans, and allows them to “work with fixtures that are designed for human hands.”