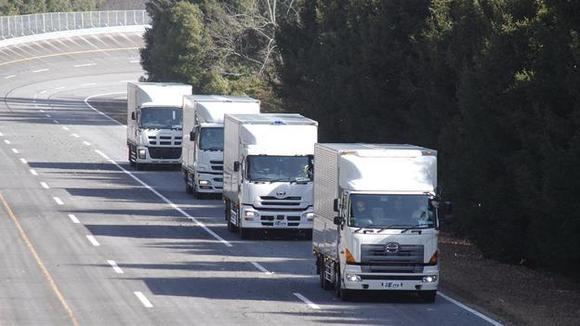 The Self-Driving Big-Rig Taking To The Streets

Autonomous vehicles are set to revolutionize the way we travel. The goal is to create safer roads for today’s distracted driver and to nearly eliminate traffic jams and congestion around the world. These self-driving cars offer a host of benefits and nearly every auto-maker is working on some level of autonomous vehicle to be ready for the roads of the future.

This technology seamlessly made its way from the consumer-level personal vehicle to the trucking industry to create a new kind of fright transportation system.

Daimler Trucks has been developing their autonomous big-rigs and have achieved some impressive results. Daimler has tested a three vehicle convoy of autonomous trucks on public roads and their technology performed flawlessly. A stretch of the A52 autobahn made for a perfect public test track where the three vehicles followed behind the lead autonomous vehicle.

The trucks were able to maintain a gap of just 50 feet between the rigs, the industry standard is 165ft. These trucks have the ability to communicate with each other via wifi which allows them to instantly respond if the lead truck needs to stop short. This allows them to maintain a smaller gap in-between vehicles which comes with its own benefits.

A tight convoy formation helps minimize aerodynamic drag. Daimler claims that the autonomous convoy cut fuel consumption and emissions by seven percent while also cutting the amount of road space required in half for these three large vehicles. Daimler has pledged to commit around $562 billion into self-driving trucks and commercial vehicles by 2020.

“The smart, self-optimizing truck has the highest priority for us. Using connected communication between the truck and other vehicles and the surroundings, we can improve traffic flow and lower fuel consumption and emissions. At the same time intelligent trucks help to lower the number of traffic accidents. This is an important step on our way towards accident-free driving” A statement made by Sven Ennerst, Head of Truck Product Engineering & Global Procurement in a Daimler press release. http://bit.ly/1oblM3M

Another fear that has been put to rest is that these self-driving trucks won’t put an end to the trucking industry or the jobs that individual truck drivers rely on. A person will still need to be at the wheel, ready to take over if a catastrophic failure were to occur with the autonomous driver. This can be seen from a picture of the test as an operator was watching the road, even if his arms were behind his head in a relaxed position.

Dr Wolfgang Bernhard, member of the Board of Management of Daimler AG with responsibility for Daimler Trucks & Buses, explains: “We are connecting the truck with the internet – making him the mobile data center of the logistics network. It connects all those involved in goods: drivers, schedulers, fleet operators, workshops, manufacturers and insurance companies or authorities. They receive information in real-time which was previously unavailable: about the condition of the tractor unit and semitrailer, traffic and weather conditions, the parking availability at motorway service stations, rest areas and much more.” http://bit.ly/1q5ZiCA

Autonomous vehicles open up a new world of possibilities. Creating safer roads and a more reliable logistics strategy that will greatly benefit all those involved throughout the supply chain. This technology is not far off, it may sound like science fiction but these vehicles are essentially ready to hit the roads. Those in charge of regulating these vehicles are having a hard time keeping up with he pace of the technology. Once regulations are put in place and few more rounds of testing can be completed, you may find yourself next to one of these autonomous convoys sooner than you think. You may even be enjoying the view from your own autonomous vehicle.