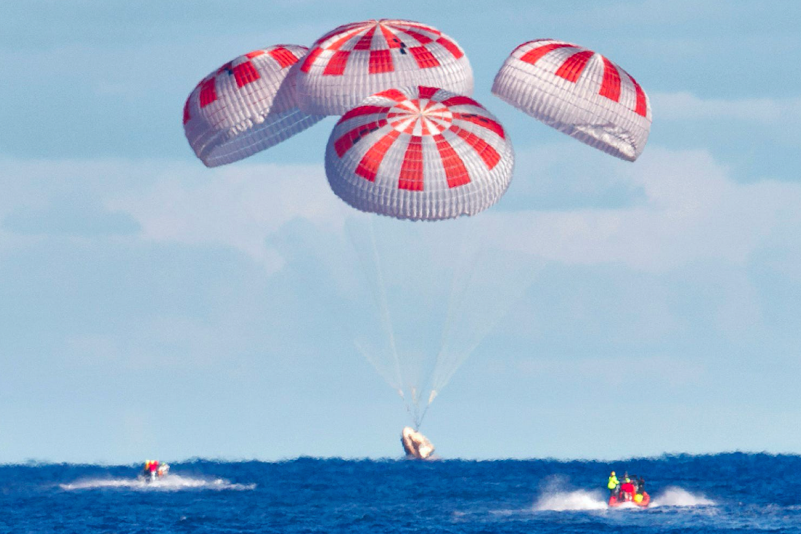 The Trophy of American Manufacturing: The Dragon Returns

The warm waters of the Gulf of Mexico provided a soft landing spot for the return of the Crew Dragon capsule. Suspended below four massive parachutes, the capsule looked a bit scorched after reaching a surface temperature of over 3,500 degrees. Surrounded by rescue watercraft, the capsule gently splashed down at 2:48 PM ET yesterday, marketing the completion of a historic mission and the beginning of a new era in the American space program.

As covered in the June issue of Manufacturing Outlook, the mission began May 30th with astronauts Bob Behnken and Doug Hurley lifting off in the new Crew Dragon capsule powered by the SpaceX Falcon 9 rocket. The significance of the launch is that it was the first time since 2011 that American astronauts took off on an American made rocket from American soil.

The successful splashdown marks the end of a 63-day mission, during which the crew traveled over 27 million miles aboard the ISS. The capsule, manufactured by Elon Musk’s SpaceX in California, represents the absolute cutting edge space travel technology and American manufacturing.

With the successful completion of this mission, the Crew Dragon design is likely only weeks away from officially receiving NASA’s certification for regular flights. This opens the door for more commercial space flights in cooperation with independent American manufacturers.

Prior to the landing, Jim Bridenstine, NASA’s administrator, said, ”We don’t want to purchase, own, and operate the hardware the way we used to. We want to be one customer of many customers in a very robust commercial marketplace in low-Earth orbit. This is the next era in human spaceflight, where NASA gets to be the customer. We want to be a strong customer, we want to be a great partner. But we don’t want to be the only ones that are operating with humans in space.”

Having this level of access to the ISS is a tremendous benefit to NASA. The ability to conduct scientific studies on the ISS will benefit many industries as well as serving as a stepping stone for our eventual return to the moon and for manned missions to Mars.