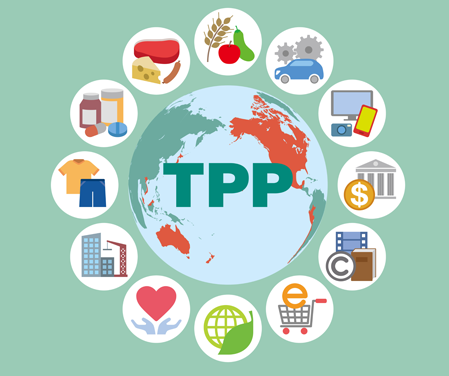 The Trans-Pacific-Partnership (TPP) is a huge talking point for both candidates of the upcoming presidential election. This trade deal, which once had bipartisan support seems to have become infamous amongst the general public. With the election less than a month away it is important for not only Americans but everyone around the globe to understand what the TPP is and the impact it will have if it is passed.

The TPP, if signed, would be the largest regional accord in history. This trade deal is comprised of a group of countries from all over the Pacific Rim including Mexico, Canada, Peru, Chile, Japan, Vietnam, Brunei, Malaysia, Singapore, Australia, and New Zealand. The deal seeks to lower tariffs amongst countries in the Pacific Rim in hopes that both imports and exports in the United States will increase. The pact is also seen as a way to handle a number of key issues that have arisen due to the increased globalization of the market such as e-commerce, labor/environmental issues, and cross border Internet communications. The U.S. is also keen on setting up formal trade agreements with Japan, Malaysia, Brunei, New Zealand, and Vietnam, as well as strengthen NAFTA, its current agreement with Canada and Mexico.

One of the main issues addressed by the pact is the lowering of tariffs and quotas among these countries. Tariffs on imports were once considered the standard for trade policy.  During the 19th century, these taxes generated most of the revenue for the U.S. After World War II the United States led the charge on dissolving tariffs. With very few tariffs remaining like the U.S.’s tax on imported shoes and Japan’s hefty tax on agricultural goods the TPP seeks to create a Pacific Rim free-trade zone.

A major issue with the TPP is trying to address is environmental and labor standards. This change is primarily directed to Vietnam, Brunei, and Mexico where worker abuse is a fairly common problem. A stipulation of the TPP is that all partnering countries must impose a minimum wage as well as workplace safety checks. It also states that all countries must allow their workers to form a union. Any countries that are not up to the standards of the trade agreement will not be welcomed to join. Concerning the environment, the TPP would address issues concerning illegal timber and wildlife trades.

The TPP also seeks to resolve issues regarding data interconnectivity between these nations. This is a growing concern among the world’s leading nations and the TPP would make it so these countries could not block any data from nations that are part of the partnership as well as eliminate the need to have servers located in the country in order to conduct business with that respective nation. It will be important to have legislation written that addresses data privacy across these countries and blocks access to source code as a condition of conducting business, which is also a major aspect of this historic trade deal.

This unprecedented trade partnership took a huge step forward last fall when all 12 countries trade chiefs met and endorsed the deal. The only step left to approve the TPP is a favorable vote by the U.S. Congress. However, many individuals that once supported the deal have shifted their opinions. Hillary Clinton, current Presidential nominee for the Democratic Party, had stated that she was in support of the agreement while she was Secretary of State but during her campaign has stated harsh criticism of the TPP. On the other side, Donald J. Trump, current Presidential nominee for the Republican party, has promised to tear up the deal if he is elected. The common complaints about the TPP are that it is failed globalization and will only create a loss of manufacturing jobs in the United States. It seems that with the bipartisan criticism this deal has received, the only hope is a vote during the lame-duck session after the election.

It will be interesting to see in the next couple weeks what will happen with this potentially revolutionizing trade deal. Will this partnership be enacted right after the election or will it be voted out destroying supporters hopes of seeing this free-trade deal in use? Check back soon as we will be reporting on the latest developments surrounding the Trans-Pacific Partnership.