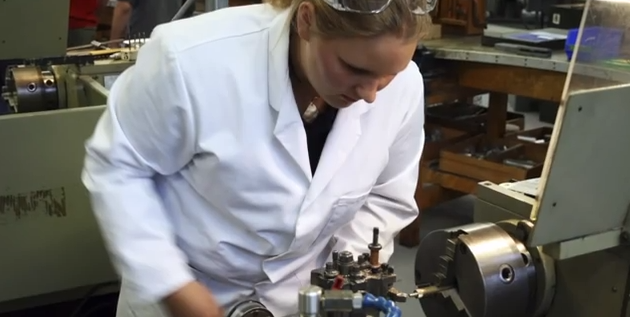 CLEVELAND, Ohio – If a group of people like Lisa Habe have their way, hundreds of more women will start working in manufacturing – from the C-suite to the front lines.

The way this group sees it, it’s still a male-dominated industry, and they want more women to consider jobs in the field that range from designing new products and making things, to running departments or the entire company.

“Manufacturing has always been a male-dominated industry, and there’s great opportunities in this industry that women are missing out on,” said, Habe, president and chairman of the board at Interlake Industries, a small business that has short-to-medium-run metal stamping facilities in both Willoughby and Lakeland Florida. Allison Grealis, executive director of WIM, said the group’s goal is to help the industry with attraction, retention and advancement, and support women in a variety of ways including training, mentoring and improving leadership and communication skills.

“They’d meet a few times a year to talk about business conditions and business best practices, and that’s when they started talking about how there was no national organization aimed at women in manufacturing,” she said. “We tested the waters in 2011 with a summit and we were ecstatic to attract 133 women.

“What we heard at that event was women wanted a group that could support them year-round with educational opportunities, training, networking, mentoring, access to jobs and the ability to post jobs,” she said.

Grealis said major manufacturers such as Ford, Boeing and Alcoa have internal women in manufacturing groups, but there was a void.

“The challenge we found is that smaller to midsize manufacturers don’t have the same resources,” she said.

Cheryl Carlisle, a graduate student at Kent State University, said she joined Women in Manufacturing because she’s excited about working in manufacturing when she finishes her master’s in business in May, with plans to work at Nestle Purina in Bloomfield, Missouri. As part of a management training program, she plans to work in human resources, but will be working on the plant floor for the first few weeks. Starting a new job can be tough, but there are many things that can be done to help Cheryl transition into her new position in human resources. By choosing an HR platform similar to this software that you’d find at Zenefits could help anyone who works in human resources to better stay on top of their workload so they can excel in this area. It can especially help people who are new in this area, like Cheryl.

Women in Manufacturing’s website includes a blog called “Hear Her Story,” featuring interviews with women in all areas of manufacturing.

“I joined because I have to be more involved with working in manufacturing and I’m interested in their webinars,” said Carlisle, 24, who has had a few internships in manufacturing ranging from working at Timken Steel to a chicken factory.

“It’s an interesting mix of people who work in manufacturing and they’re always looking for improvement,” she said. “I see HR as being helpful in that process.” At the same time, Carlisle also represents another part of the survey. She’s excited about starting a career in manufacturing when she graduates because she has worked at a few different manufacturing operations.

Betsy Engels, director of sales and marketing at Rapid Prototype Manufacturing (RP+M), is among them. She joined the 3D printing startup six months ago, after a 29-year career at Timken Steel. Engels got involved in Women in Manufacturing last year after she and Habe were both acknowledged with STEP awards. For the last few years, The Manufacturing Institute, has been recognizing women for excellence in manufacturing with that award.

Engels said it’s important to get more women interested in the field because you can’t always get the best talent when you’re only competing with half of the people interested in a field. Also, she said the economics of a career in manufacturing are significantly more lucrative than a lot of other industries, even at entry-level positions.

“It’s not just about getting more women into manufacturing, it’s really about strengthening manufacturing by engaging more people,” Engels said. “If you focus on women, you’re expanding your talent pool.”