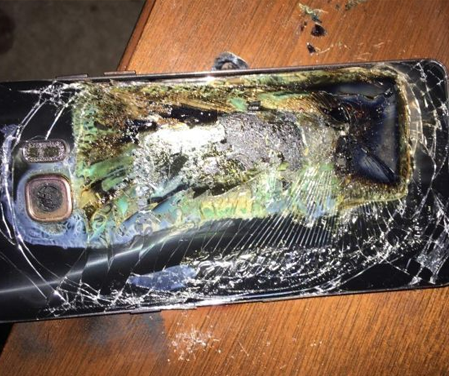 Samsung Electronics announced Tuesday that it will be ceasing all production of its popular cell phone the Galaxy Note 7. This decision was made by the South Korean smartphone manufacturer because of consumer safety concerns. This is not the first issue Samsung has experienced with this phone.

Back in September, the company had a recall for a battery defect and customers thought the issue had been resolved. However, this was not the case as not even a month later reports of phones catching fire were reported and owners of the phones are being told to return the phone for a refund. Authorities from the U.S. and South Korea are still investigating why the phones which have an allegedly safer battery are catching fire. Samsung has taken measures to make sure all phones are returned so that nobody else is harmed. Not only did all customers receive an email but anytime the phone is plugged in or turned on a notification will appear telling the user to power down the device and take it back to the store. Fortunately it is said that Samsung’s new phone should be totally free from such issues, and consumers all over the world are urged to look at the new devices by looking into the Samsung Price in Pakistan or the country in which you reside so you’re ready for the new model of Samsung when its released! Current owner options for changing devices are limited. Currently if Galaxy users would like to stay with the Android operated device they will have to switch to an older model of the phone. Most are switching to the ever popular iphone 7 which was recently released.

Samsung has been hit hard by these serious issues, on Wednesday they slashed their third-quarter profit estimate by a third and revised the figure to reflect the over $2 billion they suffered in losses. The company had initially estimated $7.2 billion in the earnings report but they are now saying the number is $5.2 billion which is 33.3 percent less than their initial estimate. The company’s stocks took a huge hit as well falling 8 percent on Tuesday, the largest loss the company has seen since the 2009 financial crisis.

Strategy Analytics has said the company could lose up to $10 billion because of the defect. They also stated that the true number would be hard to find because along with the rough numbers they have also lost consumer trust. This is devastating for the company that was once the leading smartphone maker by market share.

This story is awful news for owners of the Galaxy line of phones, as well as anyone who worked in the factories that manufactured them. It is going to be hard news to hear when the exact figure is shown for how many individuals lost their jobs because of the company’s negligent design. Hopefully everyone involved can bounce back from this unfortunate incident but as of now the future looks bleak.

Brainchild of an NAM Member